Thoughts on the opening of the Oxford Seminar in Advanced Jewish Studies on ‘Orthodoxy, Theological Debate and Contemporary Judaism: A Critical Exploration of Questions Raised in the Thought of Louis Jacobs’

The Oxford Seminar on ‘Orthodoxy, Theological Debate and Contemporary Judaism: A Critical Exploration of Questions Raised in the Thought of Louis Jacobs’, which was organised by Dr. Miri Freud-Kandel from Oxford and Dr. Adam Ferziger of Bar Ilan, got off to an inspiring start. On Wednesday night and Thursday, January 23-24, a symposium was held on the subject of Orthodox Judaism and Theology in the Twenty-First Century. This event brought together some of the leading figures in Judaic studies in the world, including three Israel Prize winners as well as numerous excellent young and mid-career scholars.

The opening event, which offered a rare opportunity in Britain to hear a lecture from Professor David Weiss Halivni, was addressed to a packed audience. These people had travelled through the snow to get to Yarnton Manor, a 400 year old English estate which is one of the ancestral homes of the Spencer family, and is today the location of the Oxford Centre for Hebrew and Jewish Studies, where the research seminar is based. In the discussion that followed the lecture the encyclopaedic knowledge of Talmudic texts and commentaries demonstrated by both Prof. Halivni and some of the symposium guests provided an indication of the pedigree of intellectual engagement that was to follow.

Prior to this lecture there had been a reception and presentation associated with the opening of an exhibition on: “We Have Reason to Inquire: the Life and Works of Rabbi Dr Louis Jacobs”. This had been organised by the Leopold Muller Library of the Oxford Centre for Hebrew and Jewish Studies, to which Jacobs had donated his library shortly before his death. The exhibition, an exciting collection of physical and digital material from the Jacobs archives, offers an excellent resource for the study of Jacobs’ theology. It complements the research programme, which acknowledges the questions posed for Orthodox Judaism in the thought of Louis Jacobs and seeks to use these questions as a springboard to further exploration of the issues facing contemporary Orthodoxy.

The entire following day was filled with original presentations and lively debates held around an enormous conference table in the Long Gallery of Yarnton Manor, a room with fire places and engraved family seals that provided an interesting setting for discussions on Orthodox Judaism. While all the papers presented at the symposium were given by the invited scholars, among the audience there was in addition a mix of academics, rabbis, and communal figures from the Jewish community in London. The Centre provided an academic space, entirely free of any institutional Jewish bias, in which representatives of varying religious positions in Judaism could come together to talk and listen to an illustrious collection of speakers debating some central questions for contemporary Jews and Orthodox Judaism. The papers ranged from analyses of differing understandings of revelation and law and changing approaches to both of these concepts; to the battle between innovative and increasingly stringent approaches to halakha; the tensions caused by a strengthening Haredi community, which impact on a variety of notions of Klal Yisrael; and assessments of the changing role of spirituality, mysticism, and hasidism in Twenty-First Century Judaism, including consideration of gender roles.

By the second evening, as the formal symposium drew to a close, the core group of approximately twenty scholars and some family members that were staying for the entire snowy Shabbat had begun to get to know each other. At this stage the conversations became increasingly lively and stimulating.

The Shabbat that followed was a once in a lifetime experience. Professor Halivni has famously said that “I can’t daven with the people with whom I talk, and I can’t talk with the people with whom I daven.”  This, however, was not to be the case. Not that all were of one ilk. A majority were observant Jews but there were radical feminists, Conservative Jews, non-Orthodox kabbalah scholars, and observant but highly critical bible scholars. Everyone davened together, ate together, sang together, and talked Torah in the broadest sense imaginable. At Friday night tefillah, Tamar Ross presented a philosophical analysis of the evolving nature of religious truths. At dinner, James Kugel orchestrated an extended discussion about the weekly Torah portion’s account of the Shirat Hayam – midrash, manuscripts, theological challenges and more besides all featured in his talk. After dinner, Daniel Sperber spoke about prioritisation in halakhah between mitzvot bein adam le-makom and bein adam le-haveiro. In the morning David Weiss Halivni, himself a survivor, spoke about God and the Holocaust. Moshe Idel spoke at lunch about kabbalistic understandings of Tu bi-Shevat, which fell on that Saturday, and throughout Samuel Heilman, Chaim Waxman, Alan Brill, Josh Berman, Aryeh Edrei, Sarah Benor, Paul Morris, Michael Avioz, Ron Margolin, Judah Galinsky, Nechama Hadari, Adam Ferziger, Miri Freud-Kandel, David Ariel (the Oxford Centre President) and others, chimed in.  All felt that it was a unique experience that they will never forget.

On Sunday an open public lecture was held in London in an effort to enable some of the scholarship undertaken in Oxford to be shared with a broader audience. Considering how the symposium was addressing some of the live questions facing contemporary Orthodoxy it was important to move the discussion into a public setting. Another very large turnout at South Hampstead Synagogue suggested a real interest in a lecture by Professor Daniel Sperber on the topic of ‘Tradition, Continuity and Innovation: Opposing Halakhic Concerns?’

The opening events associated with this Oxford Seminar in Advanced Jewish Studies have created a real excitement about the work that is to follow. Discussion of some of the central areas of future research in Contemporary Jewry and Judaism were highlighted, certain notable gaps that require further thought also emerged. An energy and enthusiasm has been established among the OSAJS fellows who are now beginning to pursue their distinct research projects. It was an auspicious opening to what will hopefully be a productive programme.

We are aiming for regular articles to be published. For details visit Thoughts.

Copies are available from info@louisjacobs.org. Please add your name and full postal address. 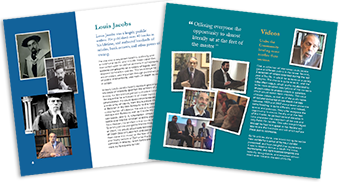