You are here: Home / Events Archive / Fields of Blood: Religion and the History of Violence 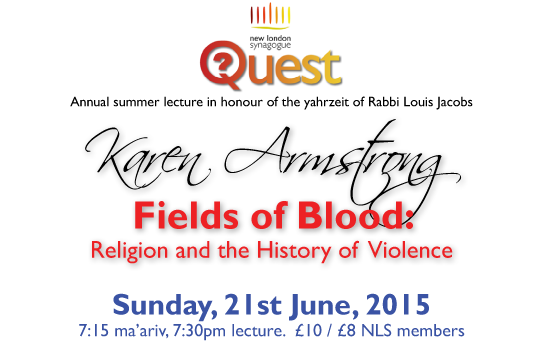 Light refreshments will be served.

Pay online at www.newlondon.org.uk/quest or on the door.

Quest are delighted that Karen Armstrong, one of the world’s leading commentators on religious affairs is making a return visit. She spent seven years as a Roman Catholic nun in the 1960s, and then read English at St Anne’s College, Oxford. Her books include “A History of God”, “The Bible: A Biography”, “The Case for God” and most recently, “Twelve Steps to a Compassionate life”. In 2005 Armstrong was appointed by Kofi Annan to join the Hight Level Group of the United States initiative ‘The Alliance of Civilizations’. In 2008 she was awared the Franklin D. Roosevelt Four Freedoms Medal and in the same year, won the TED prize. In 2013, she received the British Academy’s inaugural Nayef Al-Rodham Prize for improving Transcultural Understanding.

Since the Jacobs Affair in the 60's the Orthodox world, especially in the ... END_OF_DOCUMENT_TOKEN_TO_BE_REPLACED