You are here: Home / The "Jacobs Affair" / Defamatory press / A Curious Broadside – A Castigation by Jerusalem Haredi rabbis?

In the winter of 1995, Rabbi Jacobs received this puzzling letter, signed by a number of prominent haredi religious authorities from Jerusalem, as well as European colleagues of theirs. Undeterred by its tone, and in fact, rather confused by some of its content, he produced the following translation and comments. 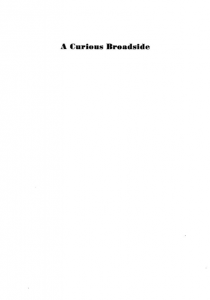