You are here: Home / The "Jacobs Affair" / Subsequent Scandals / The Garnethill Controversy

In June 1966, the Garnethill Hebrew Congregation in Glasgow gathered its members to vote on the synagogue’s affiliation to the United Synagogue, in a hope to severe its connection and join instead Louis Jacobs’s New London Synagogue as an “independent Orthodox” community. This announcement received widespread attention in the Anglo-Jewish community. While the resolution failed to receive the two thirds majority needed to pass, the controversy carried over several months. 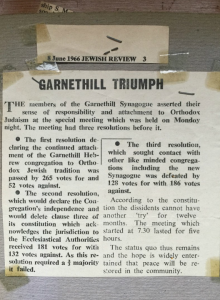